Cookies are used here so we can continue to provide the excellent service. If you had read and agreed to our Cookie Policy press OK. OK
How to Write Poetry Analysis – Your Ultimate Guide

How to Write Poetry Analysis – Your Ultimate Guide 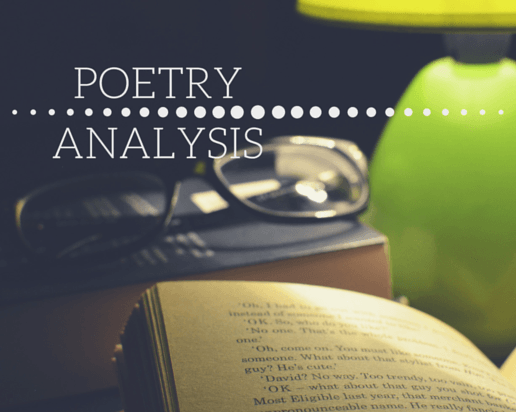 Many students dislike poetry – they find it hard to understand, and in the case of the poetry of the Middle Ages and before, almost impossible. As we move forward in time, however, poetry does become easier to understand, such as that written in the Romantic Period and later, but students often then object to the subject matter. They wonder, for example, how an entire poem can be written about a Grecian urn – what’s the point? Most of these same students, however, will recite lyrics to songs, and ultimately do understand that some poetry, if it can relate to their lives, is probably okay. Poetry analysis however? Not a real favorite. So when they are asked to write an essay about a poem, most admit they do not know how to write poetry analysis, and they do struggle. This post should take some of that “struggle” away.

The word “analysis” means to take something apart, examine its parts, and then to put it back together again and draw some general conclusions. And this just what is done in poetry analysis. It should not be confused with the term literary criticism, however, because that focuses more on evaluation and judgement. An analysis is written for understanding, not judgement.

The Process for Crafting a Poetry Analysis Essay

As we move through each step of this process, we’ll take a look at two poems written by William Blake – “The Lamb” and “The Tyger.” Blake was of the romantic period, along with others like William Wordsworth, roughly from 1785-1835.

You have now found the theme or meaning of the poem. That is just the first part of poetry analysis. Now you will be looking at other factors that contribute to the overall effect of the poem. First, the technical.

These are the technical aspects of poetry analysis. Now the Language. Poets do their best to try to appeal to the reader’s senses and/or to use words that conjure up images; they also use figures of speech (similes, metaphors, etc.) to give further meaning. All of these thing together are called “poetic devices.”

Now you are ready to write your essay. Here is a good structure.

Poetry analysis is not as difficult as you may originally think. Once you have completed one, additional analyses will be much easier. And, if you are having difficulty understanding the poet’s message, there is certainly no shame in researching what others have to say about it.

Place an order
Thank you!

Password recovery instructions have been sent to your email

Check them to proceed!